Professor Layton Wiki
Register
Don't have an account?
Sign In
Advertisement
in: All Puzzles, 20 Picarats, Select and Submit,
and 3 more
English

Vijf stempels
Five Stamps is a puzzle in Professor Layton and the Unwound Future.

The five numerical stamps shown below are designed to fill in the four blank squares and complete the equation. Only one digit can be used in each square.

Your task is to make a valid equation using the fewest number of stamps to fill all four blank squares.

Pick the stamps you'll use by checking the boxes below them, and then tap Submit.

Here are five numbered stamps.
Stamp the numbers into the blank spaces to complete the equation. Only one digit can fit into each blank space, and you must use the lowest possible number of stamps.

Select the stamps that you need to use, then touch Submit.

Think of all the possible equations you can create with the five stamps.

Think of all the ways you could do this using the five numbers on the stamps.

It might sound simple, but when trying to figure out how to use the fewest number of stamps, don't forget that if you use the same stamp multiple times, it still only counts as one stamp.

This puzzle can't be completed using just these five numbers. Remember, though, that you're not writing the numbers--you're stamping them. So be sure to consider all of the different ways you can use each stamp.

Be aware that you're using stamps, not writing the numbers.
See if you can use the stamps in different ways to produce different numbers.

There's no up, down, left, or right to the stamps, despite what you may think.

There's only one stamp, however, that can be rotated 180 degrees to create a different number. If you use the stamp as the answer to the equation, you should solve this puzzle in no time!

These stamps don't have a defined top, bottom, right or left.

One of the five stamps can be rotated 180 degrees to produce a different number. If you put that number on the right side of the equation, then you'll have no trouble working out what goes on the left.

Take a close look at all five stamps.

Take a close look at all five stamps.

The three and six stamps are all you need! If you turn the six around, it can make a nine. And to equal nine, you simply use the three stamp three times in a row and you're done!

If you rotate the 6 stamp, you can use it as a 9. You can then use the 3 stamp three times, so you can complete this equation using only two stamps. 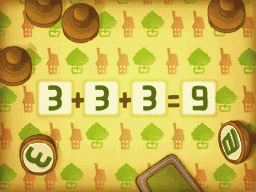