Doppellabyrinth II
Flip Maze 2 (Double-Sided Maze 2 in the UK version) is a puzzle in Professor Layton and the Last Specter.

The goal is to move the ball to the end of the maze, which is marked by a star in the lower-right corner.

When the ball is dropped into one of the holes, it will appear on the other side of the maze.

This maze is a bit bigger than the last one. Can you get the ball to the star?

Starting from the top-left corner of the maze, guide the ball to the star in the bottom-right corner. When the ball falls into one of the holes, it will appear on the other side of the maze.

The maze is bigger this time. Can you get the ball to the star?

You've probably heard this hint before, but it's a good idea to use the Memo function to keep track of your puzzle progress for this type of puzzle.

By doing so, you'll be able to keep track of where you've been and avoid going around and around in circles.

You've probably heard this one before, but for this kind of puzzle it's best to make notes as you go along. That way you'll be able to spot if you keep going round in circles.

This isn't so much a hint as it is some good, old-fashioned encouragement!

If you stay focused and keep at it, you should be able to solve this puzzle. If you give it your best shot and still can't figure it out, then you can always use the next hint.

Try a little bit harder to work this one out by yourself. If you really can't manage it, then open up the next hint. Good luck!

From the start, drop the ball through the hole down and to the right or the one straight down from the start.

Whichever one you choose, you'll end up at the same junction.

The first step is to go through the hole directly below the starting point or the one down and to the right of it. You should then keep going until you reach a three-way junction.

You'll reach the same junction whichever of the two paths you choose.

Have you found the crossroads yet?

It's on the path that runs slightly to the bottom right of the center.

Have you found the crossroads mentioned in Hint 3 yet? It's on the path that runs slightly to the bottom-right of the centre on the side of the maze that has the star.

That was a lot of work, eh? You deserve a glass of lemonade and some cake.

Phew, that was a twisty one! You deserve a rest. 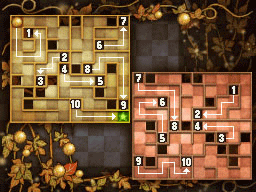 Retrieved from "https://layton.fandom.com/wiki/Puzzle:Flip_Maze_2?oldid=85360"
Community content is available under CC-BY-SA unless otherwise noted.