Jamsessie
Four Jams (Jam Weight in the UK version) is a puzzle in Professor Layton and the Unwound Future.

Four types of jams are combined into pairs and placed in the four boxes below.

Use the scale to determine the relative weights of each type of jam, and label them from lightest to heaviest, 1 to 4.

Use the scales to work out the relative weights of each type of jam and rank them 1 to 4, with 1 being the lightest and 4 the heaviest.

Identify the boxes that share a jam with each otehr. By weighing these boxes together, you can compare the weight of the two jams that aren't the same.

There are some boxes that have one type of jam in common. By weighing those boxes together you can compare the weight of the two jams that aren't the same.

Try comparing the red/blue with the red/green box. You should be able to identify whether the blue jam is heavier than the green jam or vice versa.

Try weighing the red-blue box with the red-green box.

This way you can find out which one is heavier, the blue jam or green jam.

Continuing on from Hint Two, try to figure out the weight of the red jam.

To do so, compare the red/green box with the blue/green box. You should find that blue > green > red.

Picking up from where Hint 2 left off, the next step is to check the relative weight of the red jam.

In order to do this, weigh the red-blue box with the blue-green box. You'll find that the red jam is lighter than the green jam, which gives you a partial order: blue, green, red.

Thinking of red, green, and blue as 1, 2, and 3 temporarily (lightest to heaviest), you'll find that the yellow/yellow box and the blue/green box are equal in weight. This means that the two yellow jams equal 3 + 2 (the relative weights of the blue and green jams).

In other words, one yellow jam has a weight of 2.5. If you fit that into what you know about the rest, you're done!

You need to be methodical in how you weigh the jars of jam.

There's a certain knack to knowing which boxes to weigh together.

Comparing the red/blue box with the red/green shows that blue > green.

Comparing the red/blue box with the blue/green box shows that green > red.

And finding that the yellow/yellow box is equal to the blue/green box tells you that yellow is between blue and green!

Starting with the heaviest, the order is: blue, yellow, green, red.

By weighing the red-blue box with the red-green box, you can work out that blue jam is heavier than green jam. Weighing red-blue with blue-green tells you that green jam is heavier than red jam. Finally, by ascertaining that yellow-yellow is the same weight as blue-green, you can work out that the weight of yellow jam is between that of blue jam and green jam. 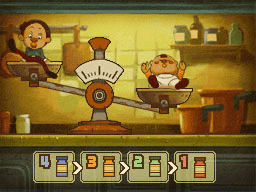 Retrieved from "https://layton.fandom.com/wiki/Puzzle:Four_Jams?oldid=88712"
Community content is available under CC-BY-SA unless otherwise noted.