From Five to Four

None
From Five to Four is a puzzle in Professor Layton and the Curious Village.

A set of matches are arranged so they form five squares.

To solve this puzzle, you need to change the number of squares below from five to four by moving exactly two matches.

Your four squares must be uniform in size, and you must use all of your matches when forming the squares.

In the original layout, every match is needed to form the five squares, so the task of forming one less square while still using all of the matches might seem challenging.

However, you can make things easier by focusing on reducing the number of matches that serve as a side for multiple squares.

Look at those matches again.

For as simple as it seems, this puzzle actually requires a good deal of thought, doesn't it? 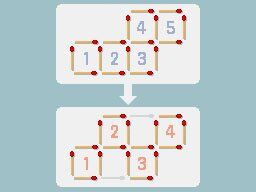 In the Japanese version, this puzzle is listed as Weekly Puzzle 18.

Retrieved from "https://layton.fandom.com/wiki/Puzzle:From_Five_to_Four?oldid=85379"
Community content is available under CC-BY-SA unless otherwise noted.