Bewegingspatronen
From the Sidelines is a puzzle in Professor Layton and the Miracle Mask.

A little boy was walking around town when he came to a stop and just watched people move around a bit. They were moving around in three distinct patterns, as shown.

The people he watched were in profile the entire time they were moving.

Where was the boy watching from? Circle your answer on the map.

A little boy who was walking around town stopped in a certain place and stood watching people for a while. They were moving around in three distinct patterns, as shown.

Where was he? Circle your answer on the map.

By the way, the patterns are shown as seen from the side.

None of the movement patterns look much like those of people at first glance.

People wouldn't be moving like that on their own...

The people in patterns A and B appear to be using something that's causing them to move like that.

They have a pretty regular rhythm going too...

The three movement patterns are all of people on kinds of apparatuses All three can, of course, be found at the same place. Maybe if you went to that place, you wouldn't be sure which apparatus you wanted to play on first?

The three kinds of apparatuses are all things people get on for fun. The little boy was just watching, but maybe he wanted to join in too?

Remember, all these movement patterns are happening in the same location.

He was at the park.

A shows someone swinging on a swing.
B shows two people on a seesaw.
C shows someone sliding down a slide and running back to the ladder to go again.

A shows someone swinging on a swing.
B shows two people on a see-saw.
C shows someone sliding down a slide and running back to the ladder to go again. 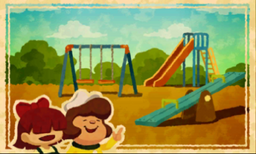 Retrieved from "https://layton.fandom.com/wiki/Puzzle:From_the_Sidelines?oldid=88736"
Community content is available under CC-BY-SA unless otherwise noted.