Professor Layton Wiki
Register
Don't have an account?
Sign In
Advertisement
in: All Puzzles, 45 Picarats, Jigsaw,
and 3 more
English

Schrumpf den Hut!
Hat Trick is a puzzle in Professor Layton and the Last Specter.

"There was a tall silk hat inside the old bag. It's a bit too large to keep around, though... Is there any way you could make it smaller? You're not allowed to let pieces overlap, of course."

"There was an elegant top hat inside that old bag. It's a little large to keep around, though. If only it were smaller...

Can you rearrange the pieces to make a smaller hat? The pieces mustn't overlap."

In the other puzzle, you made the hat shape by placing the three pieces next to each other. If you are using the same three pieces, no conventional solution will result in a smaller hat. You're going to have to look at this problem in a new way.

The frame given to assemble the pieces in should serve as a hint.

If the task is to make the hat smaller, then why have you been given a larger space to work in?

Take the piece that forms the top of the hat and place it on the bottom center without rotating it. The silk hat will rest on top of this piece.

Take the piece that forms the top of the hat and place it in the bottom-centre without rotating it. The top hat will rest on top of that piece.

Place the two larger shapes in the top-left and top-right corners.

Can you see the outline of a silk hat as you place the shapes?

Can you see the outline of a top hat as you place the shapes?

It does look smaller now, doesn't it? 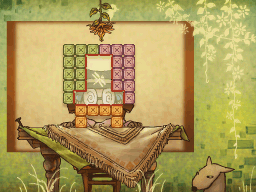