모자 쓰는 날
Hat Weather is a puzzle in Professor Layton and Pandora's Box. For the puzzle in the American version of the game, go here.

There is a fellow with very particular rules about when he wears his hat.

Below is a schedule of when this fellow decided to wear his hat over the course of one week. Use the panels to fill in the weather for each day of the week.

Start by placing a rain tile on each day where our friend didn't wear a hat.

Once you place the rain tiles down as described in Hint 1, you may notice that there are no more places left for your cloud tile.

You could place it down on one of the days with a hat if that day was the second day of cloudy weather in a row, but no two days in this week appear to have been cloudy...

If the weather was cloudy on the Sunday of the previous week, he could wear his hat on Monday.

Think hard about the man's rules concerning his hat and try again.

If you assume that the Monday shown was the second cloudy day in a row, then our friend must have worn his hat on that day. The rest of the solution then falls right into place. 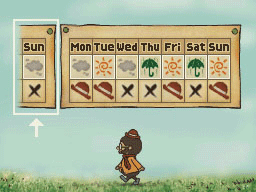 Retrieved from "https://layton.fandom.com/wiki/Puzzle:Hat_Weather_(UK)?oldid=86192"
Community content is available under CC-BY-SA unless otherwise noted.