Tel de trawanten
Hide-and-Goon-Seek (Henchman Hunt in the UK version) is a puzzle in Professor Layton and the Unwound Future. The puzzle must be solved in order to progress the story.

I got a feeling the Family's goons might be lurking around here. I didn't want any trouble, so I've hidden in a spot where I can spy on them without being seen.

Do me a favor, will you, and tell me how many goons there are?

"Ah'm afraid there might be some of that Family lot up ahead... There's no telling whit they'd do if they spotted me. Ah've taken up a hiding spot behind this wall, so's Ah can take a wee peek withoot being found.

Could ye please help me oot - jist how many henchmen are actually oot there?"

There's the leader! He's up on the balcony, toward the top right!

"There's the head henchman, upon the balcony taewards the top-right!

Those goons hide in the darnedest places! See that barrel at the bottom right shaking around? Sneaky...

"They're hiding in places ye wouldnae even dream of! Take a look at that barrel in the bottom-right, there's something nae right with it..."

Unbelievable! It looks like there's one up on the roof at the top left!

Or is that just a hat? You'd better take a look.

"They're hiding in awfully strange places! Over there on the top-left, Ah think Ah can see a hat...

Try checking every nook and cranny.

Check every nook and cranny!

There are nine goons creeping about. 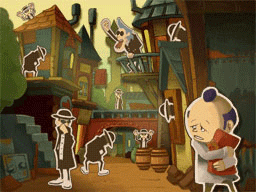 Retrieved from "https://layton.fandom.com/wiki/Puzzle:Hide-and-Goon-Seek?oldid=87397"
Community content is available under CC-BY-SA unless otherwise noted.