Professor Layton Wiki
Register
Don't have an account?
Sign In
in: All Puzzles, 30 Picarats, Write Answer,
and 3 more
English

Drukke dubbeldekker
How Many People? is a puzzle in Professor Layton and the Unwound Future.

How many people total were in the bus?

How many people were on the bus in total?

Even if you think you got the answer from a quick calculation, you might have completely overlooked something.

Even if you think you've got the answer after a quick calculation, you might have completely overlooked something.

Don't forget that it was the tour guide who gave you all this information.

Don't forget that it was the conductor who gave you all the information.

The upper level has 40% as many tourists as the bottom level. In other words, two-fifths of 25 tourists, or 10 tourists. So that's 35 total tourists.

Is that everyone, though?

The top deck has 40% as many passengers as the bottom deck. In other words, two fifths of 25 passengers, or 10 passengers.

That makes 35 passengers in total.

Is that everyone, though?

Hint Two reminded you that, besides the tourists, there's also a tour guide riding the bus. Moreover, a bus can't run without a bus driver!

Hint 2 reminded you that apart from the passengers, there's also a conductor on the bus.

Doesn't a bus need a driver as well?

40% is two fifths. But even if you get that, there's still a catch.

Thirty-seven people were riding the bus. There were 25 tourists in the lower level, and 40% of that is 10 tourists in the upper level. This amounts to 35 tourists. If you then add the tour guide and bus driver, you get a total of 37 people.

There were 37 people on the bus: 25 passengers on the bottom deck and 40% of that, or 10 passengers, on the top deck. This amounts to 35 passengers.

If you add the conductor and bus driver, you get 37 people in total. 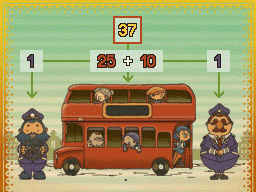