It All Adds Up

Write Answer
It All Adds Up is a weekly puzzle in Professor Layton and the Unwound Future.

Now for the puzzle part:

What is the smallest number for which the sum of its divisors (not including the number itself) equals the original number?

The answer is a single-digit number.

Don't be intimidated by the fact that this is a calculation problem. Just think about it for a bit. It's easier than you might expect at first. 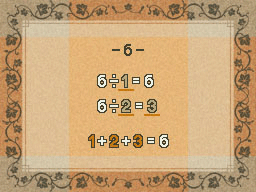 Retrieved from "https://layton.fandom.com/wiki/Puzzle:It_All_Adds_Up?oldid=86181"
Community content is available under CC-BY-SA unless otherwise noted.