Professor Layton Wiki
Register
Don't have an account?
Sign In
Advertisement
in: All Puzzles, 30 Picarats, Arrange,
and 3 more
English

El panel del buzón
Letter Box Plate is a puzzle in Professor Layton and the Spectre's Call. For the puzzle in the American version of the game, go here.

It looks as though the letter box was jerked open at some point and the pieces making up the number plate fell off.

Apparently, the plate used to read "1234", but it's hard to tell how the pieces fitted together.

Can you arrange the pieces so the letter box looks the way it did before?

The pieces don't necessarily make up the digits on their own.

In fact, if you try thinking about what the pieces aren't making, you'll be almost there.

If you start by working out which pieces belong in the corners, it becomes quite easy!

If you're still confused about how everything fits together, look at the colour of each tile in the plate.

Make sure to follow the pattern of alternating colours when putting the pieces together.

The number 1234 is formed by the spaces between the pieces, not the pieces themselves.

Surely the streets around here can't be that long, though? 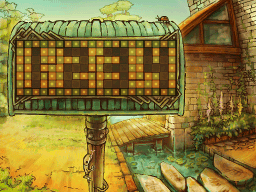