None
Lion vs Cheetah is a puzzle in Professor Layton and the Curious Village.

A cheetah and a lion square off in a 200-yard race. The first one to run 100 yards, turn around, and run back to the start line wins.

The cheetah leaps three yard in one jump, whereas the lion only leaps two yards with each bound. To make up for his lack of speed, the lion jumps three times for every two jumps the cheetah makes. Assume their pace stays consistent the whole race.

Who will win this race?

Remember that the race is 100 yards there and back. It's a very important fact, and once you realize its significance, the puzzle is a snap.

Give it another shot.

Think about the differences in the way the two animals move.

The speed of the two animals is equal, but the lion reaches the exact halfway point of the race in 50 jumps. The cheetah's final jump, on the other hand, goes two yards over the halfway point. This means that when the cheetah turns around to finish the second leg of the race, it will have to run 102 yards instead of 100 yards. This cheetah will run a total of four yards more than necessary.

As strange as it may seem, this race goes to the lion. 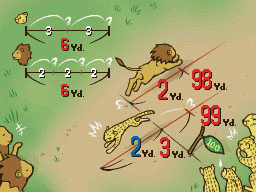 In the Japanese version, this puzzle is listed as Weekly Puzzle 28.

Retrieved from "https://layton.fandom.com/wiki/Puzzle:Lion_vs_Cheetah?oldid=86328"
Community content is available under CC-BY-SA unless otherwise noted.