Mutter und Tochter
Mother & Daughter is a puzzle in Professor Layton and the Last Specter.

A mother and daughter have become separated from one another. As shown below, the streets in their village form a perfect grid. The mother is at point A, and the daughter is at point F.

At which point, A - F, will they reunite?

A mother and her daughter have got separated in a village in which the streets form a perfect grid. They anxiously start looking for each other.

At which point do mother and daughter reunite? Choose a point from A to F.

There's no trick to solving this puzzle, other than taking it slow and steady and tracking both paths simultaneously.

There's no way to solve this puzzle but to patiently follow both mother and daughter's paths until they cross.

After one round-trip each, they still won't have crossed paths.

If one of them would just stop moving it might make things easier, but they're both determined to keep walking until they find each other.

It looks as if neither will meet the other on their first round trip. If only the mother would stop for a moment, they could meet sooner...

After the mother completes one round-trip from A to F and back to A, the daughter will be at point B and on the way to C.

The point where they'll eventually reunite is just a bit farther...

At the end of the mother's first round trip, when she has got back to point A, the daughter is at point B, facing point C. The point where they're reunited is just a little further ahead.

The mother will cross paths with her daughter after she's finished one round-trip and is one her way back to point F on her second round-trip.

The daughter will be on her third round-trip, having already completed two full trips from A to F and back.

Before their paths finally cross, the mother will be at point d and the daughter at point F.

Shortly before they meet, the mother will be at point D just after the daughter leaves point F.

It takes patience to track two paths at the same time.

It takes patience to track two paths at the same time.

They'll eventually find each other at point E, while the mother is on her second round-trip and the daughter is on her third.

The mother and daughter meet at point E.

The two are reunited while the mother is on her second round trip and the daughter on her third round trip. 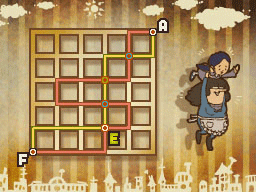 Retrieved from "https://layton.fandom.com/wiki/Puzzle:Mother_%26_Daughter?oldid=85708"
Community content is available under CC-BY-SA unless otherwise noted.