None
Nose to Nose is a puzzle in Professor Layton and the Curious Village.

Four horses are running around a course made up of several concentric circles.

It won't take even an hour for the horses to line up nose to nose once more.

All the horses' noses have to be lined up along the same straight line, but nowhere does it say that the horses must face the same direction.

The horses must be lined up nose to nose, but the puzzle doesn't say anything about which direction they're facing.

The horses will line up nose to nose 30 minutes after they begin running.

Despite the fact that two horses will be on the far side of the track, the four horses will still be lined up nose to nose. 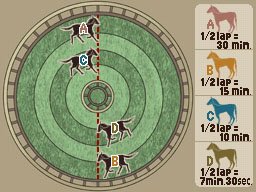 Retrieved from "https://layton.fandom.com/wiki/Puzzle:Nose_to_Nose_(CV)?oldid=65360"
Community content is available under CC-BY-SA unless otherwise noted.