Professor Layton Wiki
Register
Don't have an account?
Sign In
Advertisement
in: All Puzzles, 15 Picarats, Draw Line,
and 3 more
English

Parkeerpeikelen
Park the Car is a puzzle in Professor Layton and the Unwound Future. The puzzle must be solved in order to progress the story.

You need to get your car into the parking spot marked by the flag in the middle of the grid below. As you can see, you can only enter the spot from one side.

When you encounter an X, you must turn left or right.

When you encounter an O, you must continue going straight.

Also, your car is a bit of a clunker and you can't go in reverse. Draw a line from your car into the parking spot.

Barton needs to park his police car in the space indicated by the flag. When he encounters a cross, he has to turn left or right. When he meets a circle, he must keep going straight.

Assuming he's not allowed to reverse the car, which route does Barton need to take in order to reach the parking space?

The first space after the start is an X, so you have to turn either left or right. Turn left.

At some point, you'll need to go all the way from the left to the right along the second row from the top.

Now just figure out how to get there.

The path Barton needs to take goes straight along the second row from the top, from the left all the way over to the right.

Try and find a way to get from the starting point to the leftmost square in the second row.

Eventually, you'll need to change direction by going through all four squares in the top-right corner and then again in the bottom-right corner.

He'll be very close to the parking space after this second loop.

To get your car into the parking spot, you'll end up approaching from the right side along the row below it and taking a right turn in.

Check your route to make sure you didn't turn or go straight when you weren't supposed to. Start from the beginning, and try again!

Barton must have turned or gone straight where he wasn't supposed to.

You have to circle all the way around the parking lot to get to the space. Kind of annoying that you can't just pull straight in, huh?

Barton has to go all the way around the parking space in order to get there.

Though you showed him the route he needed to take, all those turns seem to have confused Barton. He's written off the police car and the inspector's not happy! 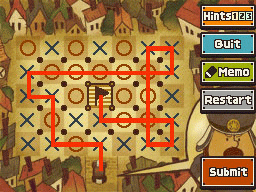