Muurschildering
Peculiar Paint Job (Wall Paint Problem in the UK version) is a puzzle in Professor Layton and the Unwound Future.

This old brick wall has been painted in a strange aesthetic. There are five unique shapes on a white background. Artsy...

Which color paint was used the most?

Touch the correct can, then tap Submit.

This old brick wall has been decorated with an unusual design.
Five different shapes have been painted on a white background as shown.
Just by looking at the picture, you should be able to tell which colour of paint was used the most. So, which one was it?

Touch the tin of paint that was used the most.

It wouldn't be incorrect to calculate the area of each color. But...there's got to be an easier way.

It isn't wrong to calculate the area taken up by each coloured shape, but there's got to be an easier way...

You're not wasting time counting the bricks in each colored shape, are you?

Even so, as long as you aren't missing something, you should figure it out.

You're not counting the number of bricks for every colour, are you?

The colors to paint this wall were blue, green, yellow, and black... Is that all?

The colours used are red, yellow, green, black and blue.

There aren't any more, are there?

No matter how big each shape is painted, none can be bigger than the background!

No matter how large the painted shapes are, they can never be bigger than the background.

Think about if you had painted it yourself.

Imagine that you were going to paint the wall yourself. You should be able to work it out.

Without a doubt, the white paint used as the background covers the most area.

White.
The white background used the most paint, without a doubt. 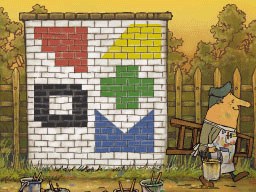 Retrieved from "https://layton.fandom.com/wiki/Puzzle:Peculiar_Paint_Job?oldid=87879"
Community content is available under CC-BY-SA unless otherwise noted.