Fotofinish
Photo Finish is a puzzle in Professor Layton and the Unwound Future. The puzzle must be solved in order to progress the story.

This finish-line photo of a race has been cut into strips, which were then mixed up. The runners finished the race in the order in the photo.

Who came in third? Circle the answer.

This photo, taken at the finishing line of a race, has been cut into strips and mixed up.
Before it was cut, the photo displayed the runners in the order they finished the race.

Which of the runners came third? Circle the letter that corresponds to your answer.

If you look closely at how the pieces fit together, you'll get it. Base your observations on things that are easy to spot, like the birds or a person with a distinctive look.

Look closely at how the pieces fit together and you'll soon get it. Base your observations on things that are easy to spot, such as birds or a person with a distinctive look.

For example, the white bird head by J tells you that their strip goes before (i.e., to the left of) the strip with D.

Where is the head of the white bird by person I?

The head of the white bird in Hint Three is missing from the photo.

Give it another try.

F came in third by a nose.

F came third by a nose. 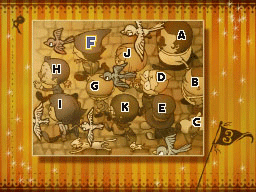 Retrieved from "https://layton.fandom.com/wiki/Puzzle:Photo_Finish?oldid=88179"
Community content is available under CC-BY-SA unless otherwise noted.