Input
Picky Polar Bears is a weekly puzzle in Professor Layton and the Last Specter.

It's snack time for the polar bears! The zookeeper puts out 10 fish and comes back to find some fish remaining as shown below. These picky polar bears have some curious habits:

What is the largest possible number of polar bears in the enclosure?

This puzzle isn't as simple as it may seem at first glance.

Examine how the fish are placed. There is definitely something fishy about them.

Have you considered all the possibilities?

The answer is six polar bears. Two fish have been completely eaten, and four have been partially eaten.

In the photo, the remains of the partially eaten fish are underneath two of the untouched fish.

Maybe the zookeeper should give the bears fewer fish next time! 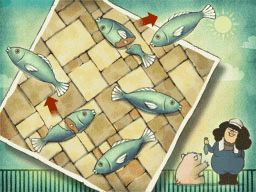 Retrieved from "https://layton.fandom.com/wiki/Puzzle:Picky_Polar_Bears?oldid=85835"
Community content is available under CC-BY-SA unless otherwise noted.