Chocoladebrokken
Pieces of Chocolate (Choc-hole-ate in the UK version) is a puzzle in Professor Layton and the Unwound Future.

Also, there's a 5-millimeter hole in the bar 1 centimeter in from the left side and 2.5 centimeters up from the bottom.

Any piece that has even a tiny bit of this hole in it can't be included in your answer.

How many more pieces can you break off from the remaining chocolate bar that are the exact same size and shape as this one?

Any piece that contains even a small part of the hole can't be included in the count.

Break up the remaining chocolate bar into equal pieces. If you make each piece identical to the first piece, you'll end up with nine more pieces.

If you break off pieces that are exactly the same as the first piece, you'll have nine pieces.

If you break the remaining chocolate bar into nine equal pieces in the same vertical manner as the first piece, you'll end up with two pieces one the left side with pieces of the hole in them. So that's 9 - 2 = 7, right?

Nope. You can do better. Try looking at it from a different angle.

If you cut the chocolate evenly into nine pieces, as described in Hint 1, the two pieces on the left edge will have a hole in them.

You don't have to break off all of the remaining pieces in the same way as the first one. Try breaking the pieces off horizontally from the left side of the chocolate bar.

You don't have to break off the other pieces in the same way as the first one. Try cutting the left 5 cm of the chocolate bar horizontally.

You can get rid of the entire hole in just one piece. If you do that, how many are left? That's your answer.

The hole can be contained in only one piece.

How many pieces are left if you do that?

You just need to think about it from a couple of different angles.

You need to bend your brain just a little.

As shown in the image above, if you break up the left side in a way that includes the entire hole in one piece, you can exclude that one and still make eight more pieces.

You should break up the left side of the chocolate bar horizontally, as shown in the image.

If you make sure the entire hole fits within one piece of chocolate and exclude that piece from the count, you're left with eight pieces. 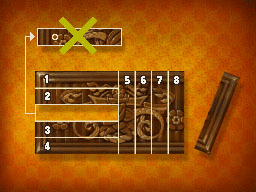 Retrieved from "https://layton.fandom.com/wiki/Puzzle:Pieces_of_Chocolate?oldid=88794"
Community content is available under CC-BY-SA unless otherwise noted.