De gesloten slang
Pool Problem (Fill the Pool in the UK version) is a puzzle in Professor Layton and the Unwound Future.

You want to fill up your pool, but all of the valves between tank and the nozzle are rusted shut.

You only have three extra valves to work with. Tap the three valves you will replace to get the water flowing.

The pool needs to be filled up with water before the kids can play in it, but all the valves on the hosepipe that is connected to the tank are shut tight.

Open just three valves to fill the pool with water.

You need to replace one of the three valves that stop water water when it first leaves the tank. The one you're looking for is either the middle valve or the bottom one.

Of the three possible valves that the water can pass through after the first split in the hosepipe, the one you need to open is either the middle one or the bottom one!

The next valve you need to replace is the one closest to the correct option from Hint One.

After opening the correct valve of the two mentioned in Hint 1, choose the route that involves opening the bottom valve!

After you've replace the valves in Hints One and Two, finding the last one should be easy. Find the path to the nozzle with the least amount of valves in the way.

Once you've opened the valves mentioned in Hints 1 and 2, the rest is easy. Have a look at the end part of the hosepipe. As long as you don't choose a route that contains a lot of valves, you'll be fine.

If you've replaced the correct valves from Hints One and Two, the last valve is the one at the bottom left.

After taking the route described in Hints 1 and 2, the last valve you need to open is the one in the bottom-left. Opening this one should allow the water to flow into the pool.

You've now opened three valves in total, so the puzzle is complete.

You can only replace three valves.

If you follow the hose from the tank to the nozzle, you'll figure it out.

Remember, you can only open three valves.

Starting from the tank, trace the route that the water would take through the hosepipe.

Now you can play in the pool!

Those are the three valves you need to open. Now the kids can splash about happily! 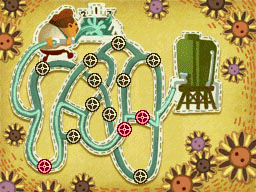 Retrieved from "https://layton.fandom.com/wiki/Puzzle:Pool_Problem?oldid=88456"
Community content is available under CC-BY-SA unless otherwise noted.