Andere tijden
Quirky Clockwork is a puzzle in Professor Layton and the Unwound Future.

This fancy analog watch features a small window at the bottom that displays the day of the month, as seen in the three examples below.

Out of the three numbers, shown in examples A, B, and C, which would be impossible to ever actually see on this watch?

This fancy analogue watch features a small window at the bottom that displays the day of the month, as seen in these three examples.

Out of the three numbers indicated by the letters A, B and C, which one would be impossible to ever actually see on this watch?

All the days on the month are listed in order on a round dial inside the watch.

When the date changes over, however, a date that doesn't exist could appear...

Two of the three examples show the date just at it's changing over from one day to the next.

Think about how two of these numbers are possible, and see if you can figure out why one of them isn't.

So at midnight, when the 19th switches over to the 20th, you would see the number 92 displayed for a few moments.

The number 93 in example B shows the date as the 29th switching over to the 30th at midnight.

Remember, this is an analog watch. Think about the type of mechanism that it must use to display all the days of the month.

The number displayed in example C is the correct answer.

You could see A or B as the date changed over at midnight, but there's no way the number in C would ever appear. 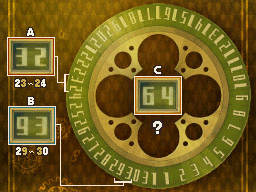 Retrieved from "https://layton.fandom.com/wiki/Puzzle:Quirky_Clockwork?oldid=86142"
Community content is available under CC-BY-SA unless otherwise noted.