Professor Layton Wiki
Register
Don't have an account?
Sign In
Advertisement
in: All Puzzles, 20 Picarats, Write Answer,
and 3 more
English

Rare sprongen
Rabbit Hops (Bunny Hop in the UK version) is a puzzle in Professor Layton and the Unwound Future. The puzzle must be solved in order to progress the story.

This peculiar rabbit has a unique method of getting around.

He travels 70 centimeters with each hop, but when he lands, he immediately hops 30 centimeters toward the direction his tail is pointing.

On a straight line, what is the minimum number of hops it will take this rabbit to reach a spot 10 meters away?

An uncommonly clever rabbit has imposed some rather strange rules upon its movement. It can jump 70 cm forwards, but after every jump forwards, it must jump 30 cm in the direction of its tail.

If this rabbit needed to travel 10 m in a straight line, what is the lowest number of jumps in which it could cover the distance?

At first glance, you might think the best this bunny can do is travel 70 centimeters forward and then 30 centimeters back, for a gain of 40 centimeter every two hops.

Can you think of a more efficient way for the bunny to move forward?

A quick calculation will tell you that if the rabbit jumps forwards 70 cm and then jumps 30 cm backwards in the direction of its tail, it will cover 40 cm of ground every two jumps. Isn't there a way of making slightly faster progress?

During the first 70-centimeter hop, there's something the rabbit can do to maximize his next jump.

Remember, when he lands, he "hops 30 centimeters toward the direction his tail is pointing."

Don't take anything for granted.

By performing a certain action after jumping 70 cm forwards, the rabbit can allow itself to jump even further towards its goal.

Think of a way to avoid wasting the 30 cm jump in the direction of its tail.

Image the rabbit doing a 180-degree turn in midair during each hop.

This maneuver would allow him to move toward the target spot with each hop!

The key to this puzzle is rotation.

By turning on the spot, the rabbit is able to jump even further towards its goal.

If during his first hop the rabbit does 1 180-degree turn in midair, his tail will point toward the target spot when he lands, meaning his next hop will take him even closer to the target.

As long as the rabbit does a 180-degree turn in midair during each hop, he will cover one meter every two hops!

Pretty nifty, but it can make you dizzy just thinking about it...

After the first jump, the rabbit turns around 180 degrees and performs its second jump. When it lands, it turns around again and starts its next jump. Repeating this pattern is the most efficient way of moving towards its goal, even if it does make the poor rabbit dizzy...

This bunny is kind of weird, but he's also quite clever.

The rabbit is certainly eccentric, but there is no doubt it is clever.

If the bunny rabbit turns 180 degrees in midair during each 70-centimeter hop, he will land and then hop 30 centimeters toward his tail, which will be pointing forward toward the target spot.

Using this method, it will simply take the bunny two hops to cover each meter!

The answer is 20 jumps.
After every 70cm jumps forwards, the puzzle rabbit turns around 180 degrees and jumps a further 30 cm in the direction of its tail, thereby covering 1 m in two jumps. 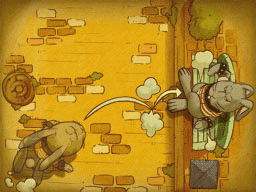