Berg de boeken op
Shelve the Books (A Tidy Bookshelf in the UK version) is a puzzle in Professor Layton and the Unwound Future.

Arrange the five books below into the green bookshelf following these rules:

Arrange these books of equal thickness on the shelf according to the rules below:

"No books can go left of the brown book." So this means it must touch the far-left side.

If there are no books to the left of the brown one, the chances are it goes on the far left of the shelf.

The third and fifth rules tell you how to arrange the yellow, white, and purple books. From left to right, put them in exactly that order.

The third and fifth clues reveal how to line up the yellow, white and purple books. From left to right, put them in the following order: yellow, white, then purple.

The second and fourth rules should give you a good idea about where to place the blue book. However, if all of the books are placed vertically, you'll never solve this puzzle.

If you keep this in mind, you'll find there's only one place you can put the blue book...

From the second and fourth clues, you should be able to deduce where the blue book goes.

However, if you're trying to stand all the books vertically, it will be impossible to meet all the conditions. Take away this constraint and there's only one place you can put the blue book...

Following the rules and put all of the books into the bookcases except for the blue one. Now see that space along to top? Turn the blue book sideways, and it will fit right in!

If standing all the books upright doesn't work, try putting one in sideways.

As long as the conditions are met, it doesn't matter how you arrange the books.

Remember, it doesn't matter how tidily the books are arranged as long as you meet all the conditions.

Placing the blue book sideways at the top is the key.

Placing the blue book horizontally on top of the others makes it work. 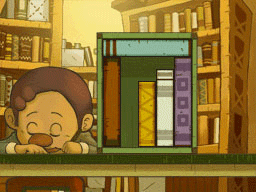 Retrieved from "https://layton.fandom.com/wiki/Puzzle:Shelve_the_Books?oldid=88142"
Community content is available under CC-BY-SA unless otherwise noted.