Circle Answer
Ski-Slope Sketch is a weekly puzzle in Professor Layton and the Unwound Future.

"I went skiing last weekend say such a beauty I just had to do a sketch," said a man to his friend. "Look! Gorgeous, don't you think?

The friend pointed to the drawing and replied, "Er...that's a rather...large nose. Didn't know that was your type, but...nice drawing anyway."

What is the friend talking about? Circle the spot on the sketch, and tap Submit.

If the sketch was colored in, there would be no mistaking the woman.

Look for a slightly pudgy guy with a mustache in the sketch. Then look for his nose...

The friend is looking at the drawing in a different way than the artist intended.

Shift your perspective, and see if you can figure out what he's talking about.

You hit it on the nose!

Depending on how you look at it, the sketch cam resemble either a young woman or a portly middle-aged man!

What the friend thought was a giant nose is actually the woman's bangs. 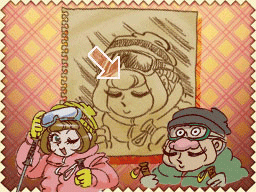 Retrieved from "https://layton.fandom.com/wiki/Puzzle:Ski-Slope_Sketch?oldid=85399"
Community content is available under CC-BY-SA unless otherwise noted.