Tap Answer
Souvenir Photo is a weekly puzzle in Professor Layton and the Unwound Future.

Here's a photo of four aliens all in a row.

If the second alien to the right of Pupolo is not Penpolo, then who is it?

Think of the arrangement of the two aliens to the right of Punpolo and make your selection with that in mind. You should get the answer.

Out of this world!

There are two possible arrangements that fulfill the conditions of the puzzle, but both of them result in Panpolo bering second to the right of Punpolo. 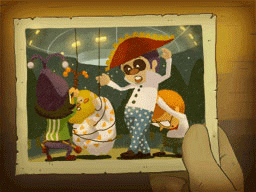 Retrieved from "https://layton.fandom.com/wiki/Puzzle:Souvenir_Photo?oldid=75424"
Community content is available under CC-BY-SA unless otherwise noted.