Write Answer
Spades and Clubs is a weekly puzzle in Professor Layton and the Unwound Future.

A full deck of 52 cards (without any jokers) has been shuffled and divided into thre roughly equal piles.

How many of the cards in the pile on the right are black.

This puzzle can be solved with simple addition and subtraction skills.

Remember, there are an equal number of red and black cards in a full deck.

One black card is correct.

These cards were shuffled, right? 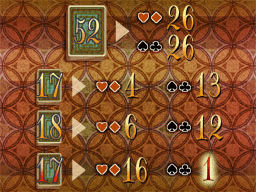 Retrieved from "https://layton.fandom.com/wiki/Puzzle:Spades_and_Clubs?oldid=86172"
Community content is available under CC-BY-SA unless otherwise noted.