Een grillige bril
Strange Glasses is a puzzle in Professor Layton and the Unwound Future. The puzzle must be solved in order to progress the story.

These two circular images show what you're seeing through you right and left eye. The images were originally the same, but one of them has now been flipped right-left and spun around an unknown amount. The shapes are the same as in the original image with the exception of one, which has been changed slightly.

Compare the shapes one by one. If you're careful about how they look when they're flipped, it's not difficult.

If you eliminate the shapes that don't change even when flipped, you can narrow it down.

Do some shapes that appear to be flipped only look that way because they've been rotated?

Don't be fooled by the rotation.

It's a round shape.

The answer is G. You might have been fooled by the flipping, but since you were paying attention to differences along the shapes' axes, you must have found the answer pretty easily. 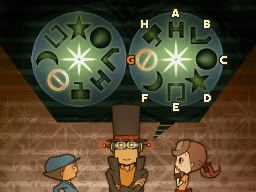 Retrieved from "https://layton.fandom.com/wiki/Puzzle:Strange_Glasses?oldid=74515"
Community content is available under CC-BY-SA unless otherwise noted.