Professor Layton Wiki
Register
Don't have an account?
Sign In
Advertisement
in: All Puzzles, 30 Picarats, Circle Answer,
and 3 more
English

Schoolbordschetsjes
Strange Shapes (Funny Shapes in the UK version) is a puzzle in Professor Layton and the Unwound Future. The puzzle must be solved in order to progress the story.

Five shapes are drawn on the chalkboard below. One of them isn't quite right.

This young student has drawn five shapes on the blackboard, but one of them is not quite right.

Try using the Memo function to draw some of these shapes yourself. Doing so might give you a hint about how they're constructed.

Try drawing some of these shapes yourself. Drawing them might give you a hint as to how they are formed.

Have you noticed yet that all of the shapes are made out of numbers? Now think about the relationship between each shape and the number used to create it.

Have you noticed that all the shapes are made up of number?

Think about the relationship between each shape and its corresponding number.

The shape in the top-left corner is made up of three threes...

The one in the bottom-right corner is made up of four fours...

That's it! Each shape is made from an amount of numbers equal to the number used to create it.

There is a correlation between the number used in each shape and how many of it the shape contains. With that in mind, can you work out which shape is the odd one out?

One of the shapes is made up of a number that can be two different numbers depending on which end it facing up.

However, if you count how many of this number are used to create the shape, it's wrong either way.

One of the shapes is made up of a number that can be read either the right way up or upside down.

Consider how many of this number the shape contains and you will see that this shape doesn't follow the rule.

All five shapes are pretty weird looking, but they're not without meaning.

These shapes are somewhat strange, but they are not without meaning.

The other shapes are made up of three threes, four fours, five fives, and seven sevens, respectively.

The oddball is neither six sixes nor nine nines.

The other shapes are made up of three 3s, four 4s, five 5s and seven 7s. This shape is neither six 6s nor nine 9s. 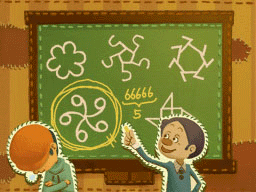