Cijfersymbolen
Strange Symbols is a puzzle in Professor Layton and the Unwound Future.

It's also a two-digit number...

Here are three strange symbols: A, B and C.

You can take it for granted that C will be a two-digit number as well.

Think of the relation between the symbols and the numbers given.

If you use the Memo function to write down the numbers you know, you might just get it. Try drawing slightly angular numbers.

Think about the relationship between the symbols and the numbers.

Try using the Memo Function to write down the numbers. You'll need to write them in quite an angular way.

Tilt your head to the left, and take another look. Notice anything new when you look at the symbols now?

Try tilting your head a little to the left and look at the symbols again.

Can you see anything?

Open the Memo function, and fill in the space around the colored sections of the each symbol. Then use the eraser to clear a horizontal line through the middle of each symbol.

You should see what's going on now.

Use the Memo Function to colour in the cavities in each symbol. When you've finished colouring, use the eraser to rub out a straight horizontal line through the middle of the symbols.

Are you seeing it now?

After completing Hint Three, turn each symbol 90 degrees to the right.

Can you see the digits now?

After following the instructions in Hint 3, try looking at the symbols from the right-hand side of the screen.

Can you see some digital-clock style numbers?

Try looking at it from a distance.

Try looking at the symbols from a bit further away.

If you turn the symbols 90 degrees to the right and draw a line straight through the middle, the numbers are 63, 89, and 52.

When the symbols are rotated 90 degrees clockwise and a line is drawn down the middle, they appear as 63, 89 and 52. 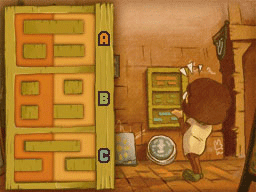 Retrieved from "https://layton.fandom.com/wiki/Puzzle:Strange_Symbols?oldid=89138"
Community content is available under CC-BY-SA unless otherwise noted.