Suits in a Row

None
Suits in a Row is a puzzle in Professor Layton and the Diabolical Box.

Below are 16 cards. There are four cards from each suit: diamonds, clubs, spades, and hearts. The cards are arranged in a four-by-four grid as shown below, and three cards have already been put down.

Arrange the remaining cards so that each vertical column, horizontal row, and diagonal line of four cards contains one card from each suit. Tap a card to change its suit.

At first, you're just groping in the dark, but when you start to get it right, everything falls into place! 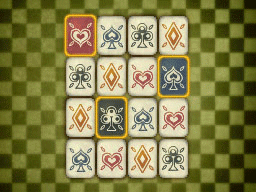 Retrieved from "https://layton.fandom.com/wiki/Puzzle:Suits_in_a_Row?oldid=76547"
Community content is available under CC-BY-SA unless otherwise noted.