Surviving in the Wild

None
Surviving in the Wild is a puzzle in Professor Layton and the Diabolical Box.

After years of bad business, a local zoo has finally run out of money to feed its animals. Bellies rumbling from days with no food, the animals make a plan to escape the zoo. After prying open the bars on their rusted cages, all the animals attempt to find their way through the mazelike walls of the zoo to the exit.

Tap the picture of each animal you think made it safely out of the zoo, and then tap submit to answer. Just remember, an animal shows its true colors in the wild.

To start, try tracing your way through the maze. This trick is probably old news to you by now, but in case you forgot, it's often helpful to try working backward from the exit.

Do mazes make your head spin? Take some of the work out of following all those roads by using the Memo function to mark dead ends and the paths that lead to them.

If you've already figured out which animals can make it to the exit, congratulations. But think for a moment about the title of this puzzle. All of the animals are free once they leave their cages, but it can be a jungle out there. Just because an animal can find its way to the exit doesn't mean it'll make it out alive...

The only animal that will safely escape to freedom is the lion. While both the rabbit and the lion will make it as far as the path to the exit, the second the lion spots the rabbit, he's guaranteed to eat it. 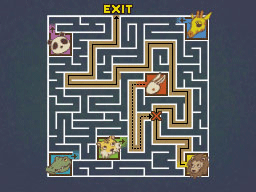 Retrieved from "https://layton.fandom.com/wiki/Puzzle:Surviving_in_the_Wild?oldid=35216"
Community content is available under CC-BY-SA unless otherwise noted.