Input
Tea Party is a weekly puzzle in Professor Layton and the Last Specter.

On a fine summer day, 20 people gathered to enjoy a splendid afternoon tea together. Of the group, 10 were drinking tea, 15 were eating cake, and three had nothing except a pleasant conversation.

How many people were both eating cake and drinking tea?

Take away the three chatters from thos in attendance to get 17.

Each of these 17 people had either cake, tea, or both. Take 15 away from that number to find the people who only drank tea. You should be able to work out the rest.

Don't forget that there were 20 people altogether.

Eight people had both cake and a cup of tea.

How do you prefer your tea. 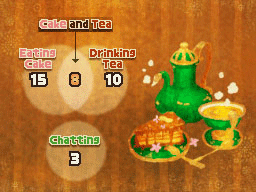 Retrieved from "https://layton.fandom.com/wiki/Puzzle:Tea_Party?oldid=85831"
Community content is available under CC-BY-SA unless otherwise noted.