Write Answer
Ten Candles is a weekly puzzle in Professor Layton and the Unwound Future.

Assuming the lighter and the blower arrive at the same time and all the candles are out to begin with, how many candles will be lit after 25 minutes?

Can you figure out how many candles will be lit after 20 minutes?

At 19 minutes, seven candles will be lit and lighting and blower out will be happening at the same time. Therefore, eight will be lit.

If you try to solve this in your head, you might get confused really quickly.

Try using the Memo function instead.

After 24 minutes, the candle lighter starts lighting again, but at this point eight candles have already been lit, so he can only light the last two.

After 25 minutes, the candle blower starts blowing them out again, so there will only be seven lit. 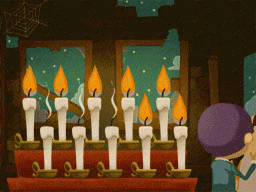 Retrieved from "https://layton.fandom.com/wiki/Puzzle:Ten_Candles?oldid=86173"
Community content is available under CC-BY-SA unless otherwise noted.