None
The Cleaning Robot is a puzzle in Professor Layton and the Diabolical Box.

Scientists in a research lab have build a robot to clean the halls. Because the robot isn't quite complete yet, all the turns it makes can either be all left or all right. The corners where it turns can be programmed.

The scientists want to give the robot a route so it cleans all the halls without cleaning any section twice. Circle the point where the robot should start this route.

The robot can move through each intersection up to two times.

You should try as many routes as possible, but if you really can't work it out, there's one place that's a little different from the others.
That's the spot!

The robot starts from point E and should be programmed to turn only right. It could also be programmed fro left-only turns if it starts at the end of the route shown here.

However you program it, it sounds like a difficult robot to use! 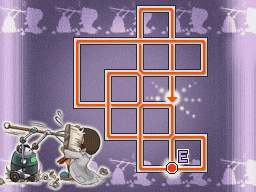 Retrieved from "https://layton.fandom.com/wiki/Puzzle:The_Cleaning_Robot?oldid=94010"
Community content is available under CC-BY-SA unless otherwise noted.