None
The Knight's Escape is a puzzle in Professor Layton and the Curious Village.

Behold the brave knight as he fights his way through a dark and winking maze. With his strength waning, the knight decides that he must exit the maze by opening the fewest number of doors possible.

Find the path that allows the knight to escape from those dark catacombs while opening as few doors as possible.

You can learn a lot by working backward and making your way through the maze starting from the goal? You'll have to open one of those in the end.

Give it another try.

The situation was dicey, but it looks like our brave knight has triumphed again. 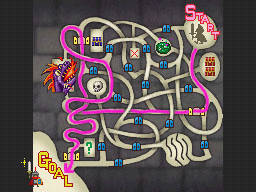 Retrieved from "https://layton.fandom.com/wiki/Puzzle:The_Knight%27s_Escape?oldid=86327"
Community content is available under CC-BY-SA unless otherwise noted.