None
The Long Formula is a puzzle in Professor Layton and the Diabolical Box.

Formulas like the first one are a familiar sight to students.

One day, a mathematician thought up the second formula. This formula basically took all the letters in the alphabet, subtracted them from x, and then multiplied them all together. Since the formula was so long, the mathematician used "..." to indicate the part of the formula. Soon after, he discovered that no matter what the numbers he substituted for any of the letters, the formula always yielded the same answer. What is that answer?

In the hidden segment of the formula is something very important.

One of the hidden sections of the formula is (x-x), which equals zero, and any number you multiply by zero equals zero! 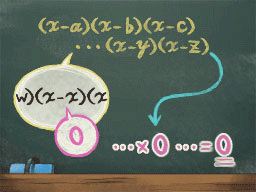 Retrieved from "https://layton.fandom.com/wiki/Puzzle:The_Long_Formula?oldid=76530"
Community content is available under CC-BY-SA unless otherwise noted.