Mark Answer
The Messed-Up Map is a weekly puzzle in Professor Layton and the Unwound Future.

This map is meant to connect each top letter to its matching bottom letter when followed as described above. However, it contains two errors. To make it work, two horizontal lines must be removed.

Tap the two lines to mark them with an X.

The two horizontal lines between letters B and C are fine as it. That should make things a lot easier.

Remember, only two horizontal lines need to be removed for the map to work. 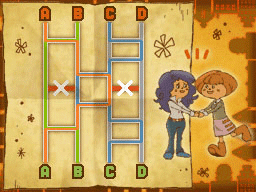 Retrieved from "https://layton.fandom.com/wiki/Puzzle:The_Messed-Up_Map?oldid=86175"
Community content is available under CC-BY-SA unless otherwise noted.