Kraak de krabbel
The Messy Note (The Scrawled Note in the UK version) is a puzzle in Professor Layton and the Unwound Future.

It seems you need to enter a number to open the door. The only clue you have is a hastily written note from a woman known for her poor handwriting.

So, what's the number?

Can you work out the number you need?

Nope, that's not the right track at all. Try looking at things a different way.

No, that's not the right track at all. Try looking at things in a different way.

The answer is a number, so could these chicken scratches also be numbers?

The answer is a number, so perhaps these scrawls are numbers too?

In this note, there are two sets of three digits that form an equation. Take a good look!

The note is an equation, consisting of two three-digit numbers.

You'll be fine once you see what the note's getting at, but until then...

If only you could find some numbers in the note... 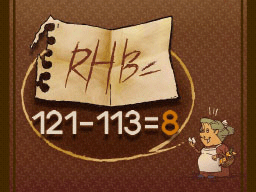 Retrieved from "https://layton.fandom.com/wiki/Puzzle:The_Messy_Note?oldid=86003"
Community content is available under CC-BY-SA unless otherwise noted.