Blokbericht
The Missing Block is a puzzle in Professor Layton and the Unwound Future.

A hidden message is revealed when one of the blocks (A, B, C, or D) replaces the box marked ?. Tap the letter that corresponds to the correct block.

Inserting one of the blocks (A, B, C or D) into the space marked "?" reveals a hidden message.

Touch the letter of the correct block.

It's understandable that you're confused by the blocks' complicated shapes.

Here's a hint: each of the blocks represents something.

Are the blocks' complicated shapes confusing you?

Here's a hint: each block represents something.

The upper blocks are letters. Try to figure out what letters the blocks represent.

The upper blocks are letters.

Try to work out which letter each block at the top represents.

As we all know, the main character of this game is Professor Layton. Think on that...

As we all know, the main character in this game is Professor Layton. Think about that for a second...

As Hint Three alluded to, the blocks spell "LAYTON."

What missing letter would complete the word?

As Hint 3 alluded to, the upper sequence of blocks almost spells out "LAYTON".

Which letter is needed to complete the word?

You need to consider this puzzle from various angles.

You need to look at this puzzle from various angles.

The answer is B, which is shaped like an "O." When you insert that block in the space and change the direction of all the blocks, they spell out "LAYTON"!

The answer is block B, which is shaped like the letter O. When you insert that block into the space and line up all the blocks, they spell out "LAYTON"! 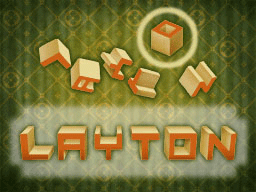 Retrieved from "https://layton.fandom.com/wiki/Puzzle:The_Missing_Block?oldid=87669"
Community content is available under CC-BY-SA unless otherwise noted.