De bevrijding
The Right Button (First Step? in the UK version) is a puzzle in Professor Layton and the Unwound Future. The puzzle must be solved in order to progress the story.

This cell door will open if you simply press the right button. Here's how to find it:

Think of the buttons as squares on a grid. From wherever you start, move from one square to another in the direction dictated by each symbol. A star means go left, a moon means go right, a sun means go down, and a drop of water means go up.

There's only one button you can start from and reach all of the others by following the rules listed above. Push that button, and then tap Submit!

In order to open the cage, you'll need to decide which button to push.
The rules are simple. Think of the buttons as squares. Each symbol indicates a direction and you proceed from square to square following these directions:
Star = left
Moon = right
Sun = down
Water = up
There is one square you can start from which allows you to pass through every square exactly once. Touch that square.

The Memo function comes in quite handy in puzzles like this. Directions can be hard to follow when thinking of them as words. Try drawing arrows to help make things easier.

This is the type of puzzle for which the Memo Function comes in really handy. It's difficult to visualise the directions using only the symbols, so try drawing an arrow in each square to make things easier.

Just pick a random square to start from, and follow the directions from there. If you draw arrows on the grid using the Memo function, it should be a piece of cake!

Try choosing a square at random and starting from there. Use the Memo Function to write an arrow on each square and trace your path.

So you've followed Hint Two exactly, but you seem to be going in circles...

Are you starting from one of the top-left buttons? One of those is the end point.

You've followed the advice given in Hint 2 but just went around in little circles? That must mean you started in one of the top-left squares.

Those squares are actually the last ones on the path.

What you learned in Hint Three is all you really need to know. If you know which square is the end point, you can work backward from there to find the start!

The button you're looking for is one of the five with a star symbol.

From Hint 3 you know the last squares on the path. Now think carefully and proceed backwards from here.

The starting square is one of the five Star squares.

Are you sure you didn't make a mistake somewhere along the way?

Are you sure you haven't made a mistake somewhere?

Once you realize that all the squares are leading you to the same end point, the start is easy to figure out.

Apart from the last square itself, all squares form a single path leading to the last square. Once you realise this, it's easy to find the starting square. 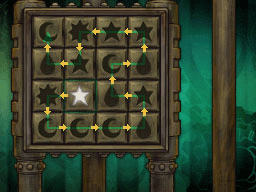 Retrieved from "https://layton.fandom.com/wiki/Puzzle:The_Right_Button?oldid=88233"
Community content is available under CC-BY-SA unless otherwise noted.