Professor Layton Wiki
Register
Don't have an account?
Sign In
Advertisement
in: All Puzzles, 20 Picarats, Rotate and Arrange,
and 3 more
English

열쇠의 수수께끼 (Key Puzzle)
The Right Key (Which Key? in the UK version) is a puzzle in Professor Layton and the Diabolical Box.

Which key opens the door?

As you might expect, the key won't open the door if its shape won't let it pass through the keyhole. Use your stylus to fit keys to the lock.

Examine each key carefully and use your stylus to move the keys and find the one that fits on the lock.

Which of these keys opens the door?

Use the stylus to move the keys and find the one that fits the lock.

Careful observation of the shapes of the keys is required to find the right one!

At a glance, the ends of the keys look too intricate when compared with the simple shape of the keyhole.

Concentrate on finding a key with a shape that matches the structure of the lock.

At first glance, the ends of the keys look much more intricate than the shape of the keyhole.

Look closely and try to find a shape that matches the keyhole.

Who's to say one end of a key is any better than the other?

Have you tried all six possibilities?

What's that? There are only three keys? That's certainly true, but try a little lateral thinking.

Turn each key around and try inserting the part you'd normally call the grip.

Rotate the keys and grab them by the part you'd normally insert in the lock.

Did it take you a while to figure it out that the portion of the key resembling the grip was actually the part that fit the keyhole? Answers can be often in the most unlikely of the places.

How long did it take you to realise that the grips of the keys could also be inserted into the lock?

This little lesson about the danger of making assumptions should serve you well in your puzzle-solving adventures. 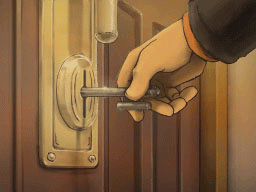