Professor Layton Wiki
Register
Don't have an account?
Sign In
Advertisement
in: All Puzzles, 0 Picarats, Tap Answer,
and 3 more
English

none
The Rotating Arrow is a puzzle in Professor Layton and the Diabolical Box.

Using the diagram below, figure out which direction the arrow faces if you continue to flip the square along the pentagon counterclockwise back to its original position.

This puzzle may seem like a pain to solve, but if you follow the example given and visualize each of the steps, it's really not all that hard.
Try sketching out each flip of the square using the Memo function.

There's nothing all that difficult about this puzzle, but it does require you to do a little creative thinking before you can arrive at the answer. 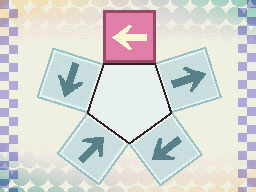