신발 가게의 손해
The Shoe Store Thief (The Shoe Shop Thief in the UK version) is a puzzle in Professor Layton and the Diabolical Box.

A woman in a shoe store pays for a $30 pair of shoes with a $50 bill. The clerk doesn't have change, so he goes to the shop next door to break the $50 bill. He then gives the woman her change.

A while later, the clerk next door comes into the shoe shop complaining that the bill she got from the shoe clerk was a counterfeit. The mortified shoe clerk gives the other shopkeeper a $50 bill of his own in apology. Both the woman with the fake bill and the shoes she took are gone. In total, how much did the shoe-store clerk lose in dollars?

A woman in a shoe shop pays for a £30 pair of shoes with a £50 note. The salesman doesn't have enough change, so he goes to the shop next door to break the £50 note, returns to his shop and gives the woman her change. A while later, the shopkeeper from next door storms into the shoe shop. It turns out that the note he gave her was a fake! The mortified shoe salesman gives the shopkeeper £50 from the till to apologise. Neither the customer nor the shoes she took are found.

In total, how much did the shoe shop lose?

Had the shoe clerk not gone next door to get change, he might never have realized he lost money.

Had the shoe salesman not gone next door to get change, he might never have realised he lost money.

How much would he have lost if he had the change in the till?

In the end, the shoe clerk essentially passed back the $50 he got from the shopkeeper next door, so he neither lost nor gained money from these interactions.

Since he used a fake note, the change the salesman got from next door was essentially "money for nothing". He gained £50.

In returning the money, he later lost £50.

The sneaky customer ended up getting away with shoes costing $30, as well as $20 in change.

The sneaky customer ended up getting away with shoes costing £30, as well as £20 in change.

Think hard about the clues you've been given and try again.

Think hard about the puzzle and try again.

The shoes the customer made off with cost $30, and the change the shoe clerk gave her cost him $20, bringing the shoe clerk's total losses to $50.

The shoe clerk received $50 in real money when he swapped the fake bill for change but had to return this same $50 when the counterfeit bill was discovered. This means these two transactions effectively cancelled each other out.

The shoes the customer made off with cost £30, and the change the salesman gave her cost him another £20, bringing his total losses to £50.

The salesman received £50 of real money in exchange for the fake note from the shopkeeper next door, and then gave her £50 back when she discovered the note he gave her was fake. These last two transactions cancel each other out. 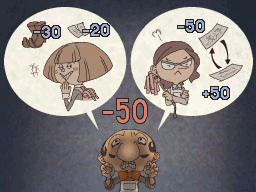 Retrieved from "https://layton.fandom.com/wiki/Puzzle:The_Shoe_Store_Thief?oldid=85769"
Community content is available under CC-BY-SA unless otherwise noted.