Mark Answer
The Top-Hat Society is a weekly puzzle in Professor Layton and the Unwound Future.

Four top-hat aficionados founded an exclusive club called the Top-Hat Society. The sign below hangs outside their swanky headquarters. Just this week, a fifth member joined the group. Instead of painting another hat to the sign, they discovered that they can simply alter the existing sign into one that represents all five of their top hats. This can be done by simply cutting the existing sign into three pieces and then reassembling it in a new way. Where should the cuts be made? Draw two straight lines.

For the first cut, divide the sign into a top and bottom piece by drawing a line through the middle form left to right.

Now think carefully about where to make the second cut.

You're trying to turn four top hats into five, so they're all probably going to become a bit smaller.

When you cut the sign as shown above and then switch the top two pieces, you get five top hats instead of four!

The hats are a little smaller, yes, but it sure beats buying a new sign! 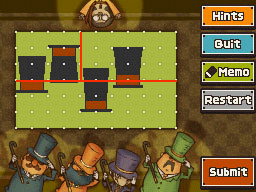 Retrieved from "https://layton.fandom.com/wiki/Puzzle:The_Top-Hat_Society?oldid=86176"
Community content is available under CC-BY-SA unless otherwise noted.