과자는 어디에? (Where Are the Sweets?)
The Winning Arrow (Which Arrow? in the UK version) is a puzzle in Professor Layton and the Diabolical Box.

A bag of candy dangles from one of three arrows attached to the wall. Assuming that all three arrows are perfectly straight, which arrow--A, B, or C-- is connected to the candy?

A bag of sweets dangles from one of three arrows attached to the wall. Assuming that all three arrows are perfectly straight, which arrow is connected to the sweets?

Don't trust your eyes! This puzzle contains an optical illusion.

Instead of looking at this one straight on, try rotating your Nintendo DS a little so that you have a diagonal view of the puzzle.

Instead of looking at this one straight on, try taking a different perspective.

Here's an interesting bit of trivia.

This particular optical illusion is known as the Poggendorff Illusion.

It would appear you fell right into the trap this puzzle set for you.

Arrow B is the one attached to the candy.

The reason this puzzle is tough for some people is because it contains a famous optical illusion. When you obscure a portion of a diagonal line with a straight shape, the two visible portions of the line appear disjointed from one another.

Arrow B is the one attached to the sweets.

This puzzle is an example of the famous Poggendorff optical illusion. When a diagonal line is partially obscured by a straight shape, the viewer tends not to be able to accurately determine which of the lines on the right is the continuation of the one on the left. 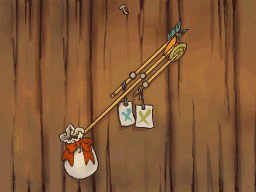 Retrieved from "https://layton.fandom.com/wiki/Puzzle:The_Winning_Arrow?oldid=85752"
Community content is available under CC-BY-SA unless otherwise noted.