Foto di viaggio
Tourist Spotting is a puzzle in Professor Layton and the Last Specter.

These four photos were taken at the same location.

Three of these were shot by tourists who took turns taking pictures of each other. One of the photos was taken on a completely different day.

Tap the three photos that were taken by the tourists who traveled together.

These four photos were all taken in the same place.

Three of the pictures were shot by a group of tourists taking turns on a single camera. The fourth photo was taken on another day by an unrelated person.

Select the three photos that were taken by the tourists.

There is one common detail in three of the photos that shows that they were sightseeing at the same time.

Compare the photos until you see what the detail is.

There is one common detail that links the three pictures taken by the group of tourists.

Compare the photos until you notice what this detail is.

If you're thinking the dog in the photo is the key, you're barking up the wrong tourist attraction.

Is there another detail that links three of the photos?

The three tourists took turns taking each others' photos. It follows that their photos would all have been taken around the same time.

What detail shows the time they were there?

Look around the feet of each person. Do you see anything there?

You're not being distracted by the animals, are you? Neither the dog nor the birds are clues.

Take a close look around the subjects' feet. Do you notice anything in particular that stands out?

The shadows in the photos will give you an idea of when each photo was taken.

Since three people were traveling together, look for matching shadows.

Take a close look at where the shadows fall in each photo.

Take a closer look at the photos. There is a detail that shows which three people must have been traveling together.

Something in the pictures will show which three are part of the same group.

You can tell which pictures were taken together by looking at their shadows.

Three photos show a person's shadow in the same position--which means their subjects must have been there at the same time.

The three pictures taken by the group of tourists all have shadows falling in the same place. This is because they were taken in the short time the travellers spent in this spot. 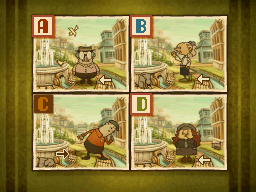 Retrieved from "https://layton.fandom.com/wiki/Puzzle:Tourist_Spotting?oldid=84583"
Community content is available under CC-BY-SA unless otherwise noted.