Professor Layton Wiki
Register
Don't have an account?
Sign In
Advertisement
in: All Puzzles, 40 Picarats, Tap Answer,
and 3 more
English

This is a logic puzzle. You know that there is only one person telling the truth.

If it does, then you know they must be lying.

If you call a liar a liar, you are telling the truth. B and C are both calling someone a liar. What does that mean?

That's right! B is telling the truth. 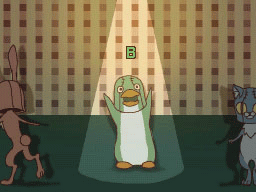