Input
Vandal's Failure is a weekly puzzle in Professor Layton and the Last Specter.

A vandal has scrawled graffiti all over this garden fence! The fence has been daubed with a series of alternating squares and circles with numbers in them. It seems like the numbers follow a pattern, but the last circle is too dirty to read.

What do you think that final number could be?

You should be able to spot a pattern.

Maybe you miscalculated your answer.

Square on the head!

The number is big, but the rule was quite simple: you just had to multiply 32 by itself. 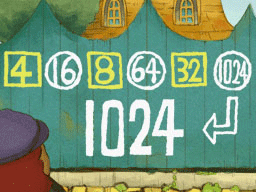 Retrieved from "https://layton.fandom.com/wiki/Puzzle:Vandal%27s_Failure?oldid=85827"
Community content is available under CC-BY-SA unless otherwise noted.