Professor Layton Wiki
Register
Don't have an account?
Sign In
Advertisement
in: All Puzzles, 60 Picarats, Circle Answer,
and 3 more
English

De schatkamer
Where's the Arrow? (The Secret Letter in the UK version) is a puzzle in Professor Layton and the Unwound Future.

There's a treasure hidden below one of the tiles in this room. The only clue is a handwritten note:

Which tile should you lift to find the treasure? Draw a circle around it with your stylus.

You receive a letter that says:
"The room in this photograph hides a secret. Remove one of the floor tiles to reveal the hidden treasure."

In the same envelope as the letter is the photograph shown below, with the following note on the back:
"Follow the arrow to where the treasure lies..."

Which tile do you need to remove in order to find the treasure? Circle your answer.

Nothing very sneaking is going on. There's actually an arrow somewhere.

An arrow has been drawn somewhere, and it's easy to spot. Look carefully.

Rather than focusing too intently on the room, try blurring your vision and having a look.

If you haven't found anything by studying the photograph intently, try casting a casual eye over the whole thing for a while.

The arrow is somewhere left of center.

The arrow is on the left-hand side of the photograph. It's actually disguised as something else.

Look closely at the paintings in the room. There's an arrow hidden in one...

Studying the framed pictures on the wall should point you in the right direction.

Look for an arrow.

It's definitely in there somewhere.

Look for the arrow!

The monkey in the painting on the wall has an arrow hidden in its face!

The tile directly below it is the one hiding the treasure.

The nose and mouth of the monkey in the picture on the wall combine to form an arrow shape. The treasure can be found under the floor tile directly beneath this arrow. 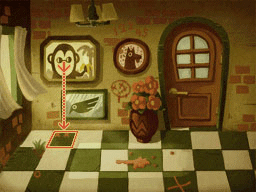