De venstervernieler
Who Broke It? (Break Time in the UK version) is a puzzle in Professor Layton and the Unwound Future.

One of these people broke the window. When asked about it, they gave the following statements in order, starting with A.

The person whose story sounds fishy is the culprit. Who is it?

One of these students broke a window, so you ask each of them who did it, in order.

The one whose story sounds fishy is the culprit. Who is it?

Read the statements in order, and pay close attention to what each person is saying.

Listen carefully to their testimonies, in order...

Read the statements again in order from A to D. One of them is quite suspicious...

Look again at the content of each testimony and the order in which they are given.

Do that, and you'll soon notice that one of them is saying something not quite right.

The culprit is the person who spoke a little too quickly. If the statements were given in the reverse order from D to A, the culprit might have gotten away with it.

The culprit is the one who spoke in haste. If you'd heard the testimonies in the opposite order, the culprit might never have given themselves away.

By blaming D so hastily, the culprit ended up incriminating himself!

The culprit gave the game away while trying to pin the blame on D.

Remember, their statements were given in order.

Ask them again, "in order".

C is indeed the culprit. He said that D was lying before D had ever spoken!

Clearly something's up with C.

C broke the window.
He said that D was lying, even though D hadn't spoken yet.

It doesn't get any fishier than that! 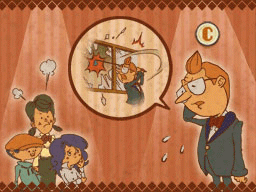 Retrieved from "https://layton.fandom.com/wiki/Puzzle:Who_Broke_It%3F?oldid=87771"
Community content is available under CC-BY-SA unless otherwise noted.